Advocating for Virginia Education Professionals Since 1863

On December 29, 1863, the Educational Association of Virginia was founded at a statewide meeting held in the basement of the First Baptist Church in Petersburg. Its mission: “By all suitable means, to promote the educational welfare of Virginia and of the whole country.” Several name changes later, the Virginia State Teachers Association in 1925 formally became the Virginia Education Association.

Throughout its history, VEA has fought for sound instructional practices, adequate textbooks and resources for students, and compensation and benefits to attract the best into careers in Virginia public schools.

Following merger with the predominantly black Virginia Teachers Association in 1967, the merged Union has played a key role in advocating for educational equity in Virginia, and four African-Americans have been elected president: Mary Hatwood Futrell (1976-78), Cheri James (1996-2000), Princess Moss (2005-2008) and James J. Fedderman (2020- ), who became the first Black male elected to lead the Association.

During the 1990s and continuing to the present time, VEA has been a major force for the betterment of public education, advocating for and winning significant state funding increases for schools, boosting instructional support for teachers, and securing adequate health insurance for retired teachers. 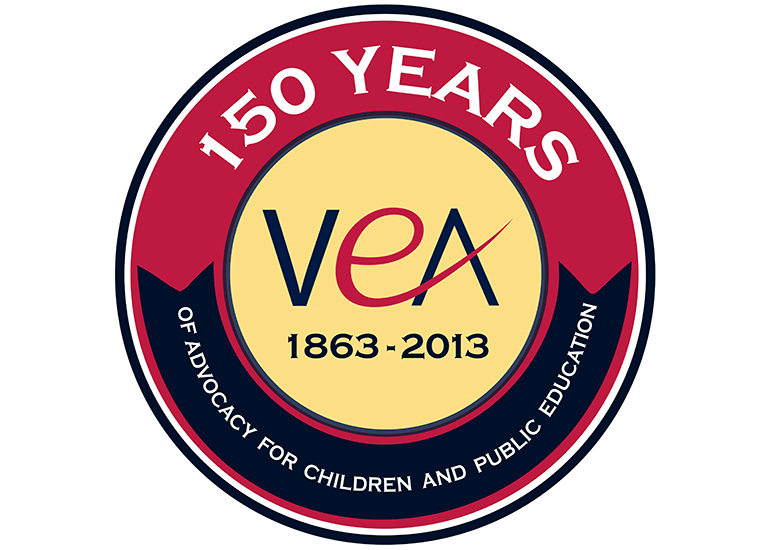 Timeline: A Journey to Progress in Education

The founding convention of the Educational Association of Virginia, the forerunner to today’s Virginia Education Association, is held at Petersburg.

Following the U.S. Supreme Court decision in Brown v. Board of Education, the VTA calls on the creation of one, unified association of educators in Virginia. Realization of that call took until 1967.

Sixty-three black teachers are fired by the Prince Edward schools to evade compliance with the U.S. Supreme Court’s decision to integrate schools. NEA and VTA work together to find them jobs and to provide food and financial support for the children turned away from public schools.

The VEA and the Virginia Teachers Association, which represented black teachers, merge.

Chesterfield teacher Mrs. Susan Cohen wins a court ruling that she could not be forced to resign her position because of her pregnancy. Decision was later overruled by US District Court in Richmond but was eventually upheld by the U.S. Supreme Court.

After Virginia Supreme Court halts negotiations for public employees, more than 7,000 teachers and public employees rally in Richmond on February 4. They oppose proposed cuts in education funding and support passage of a statewide collective bargaining law.

VEA wins an 18.5% increase in state funding for schools.

VEA successfully lobbies to reduce retirement age from 60 to 55 years.

VEA wins legislation that guarantees that teachers must be paid within the first month of employment.

Three years of lobbying for improved school funding through the Brighter Futures Campaign results in a record $1.5 billion increase in state funding for schools.

VEA reaches its 150th anniversary with a year-long campaign, 'Keeping the Promise: 150 Years of Advocacy for Children and Public Education.'

The 50th anniversary of the merger of VEA and VTA is recognized with a documentary film and the installation of an official historical marker of the birth of the VTA at the Jackson Street United Methodist Church in Lynchburg.

The Virginia Teachers Association served the Commonwealth’s black teachers from its inception in 1887 until merger with VEA in 1967. The VTA tirelessly advocated for the welfare and rights of black students and educators over those eight decades, and its contributions live on in the merged VEA decades later.