“You are here, and I am here, for one reason—and that is to elect friends of public education and to defeat Donald Trump in November,” said VEA President James J. Fedderman.

The National Education Association Fund recommends candidates for federal races, and Princess Moss, former VEA president now vice president-elect of the NEA, charged up the crowd on the day that Joe Biden, NEA’s endorsed candidate for president, was officially nominated at the Democratic National Convention.

Former Virginia Governor Terry McAuliffe was a welcome surrogate for Biden and told VEA activists that the White House and the Senate are there for the taking—if we are willing to fight for candidates who fight for public education. Biden’s wife, Jill, is a college instructor and NEA member. McAuliffe said Biden would sweep education secretary Betsy DeVos out of her post and make public education a priority.

Also bringing remarks were current members of Congress Abigail Spanberger, Donald McEachin, Jennifer Wexton, and Elaine Luria, as well as Congressional hopefuls Dr. Cameron Webb and Qasim Rashid. All have been recommended by the NEA Fund. 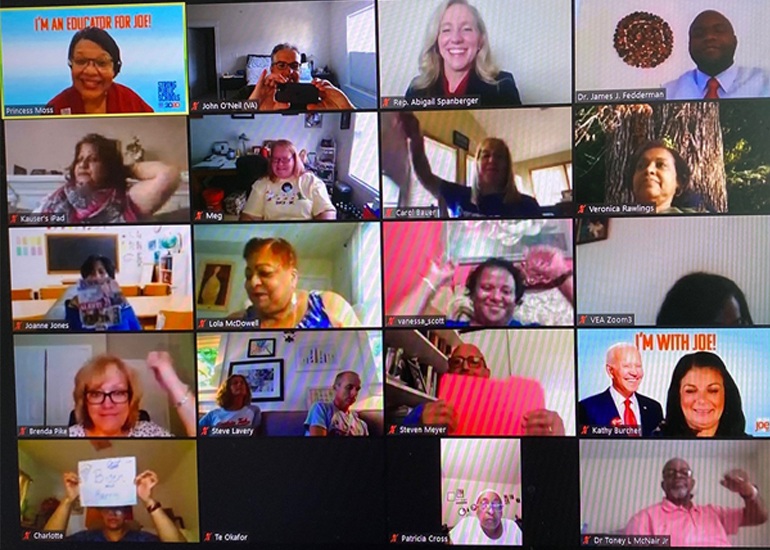 This fall, VEA members will be working to support recommended candidates as well as encouraging voter registration and voting by mail.

Fedderman encouraged those attending the virtual rally to sign up to be an Educator for Joe and to check out volunteer opportunities. “I am ready to take action, and I hope you are, too,” he said.