It’s crossover day and both the House of Delegates and state Senate worked overtime to get bills to the other side of the aisle before the deadline.  The House of Delegates passed bills to repeal Virginia’s Permissive Collective Bargaining law for public employees, expand charter school authorization to unelected, unaccountable regional charter boards, take away local authority from school divisions to make decisions in emergency situations, and ban the teaching of so-called “divisive concepts” in schools.

RICHMOND, Va. – “Stronger Communities. A Better Bargain” – a coalition of labor unions collectively representing thousands of working families across Virginia – today commended Delegates Guzman, Krizek, Lopez, Bennett-Parker, and Scott for standing up and speaking on the floor yesterday against bills that would repeal or chip away at the freedom of public service workers to join together in a union and bargain collectively for a contract.

Since taking effect last year, Delegate Guzman’s HB 582 and Senator Dick Saslaw’s SB 939 have triggered a slew of collective bargaining ordinances. Fairfax County, Loudoun County, Arlington County, the City of Alexandria, and the Richmond School Board have all passed measures to opt-in to giving their workers a voice on the job. Prince William County has taken a step in that direction, while workers in Virginia Beach, Portsmouth, Richmond and Norfolk and teachers in Albemarle County and Prince William County are engaged in various stages of the process of securing collective bargaining rights. The Daily Press reported that Newport News public service workers are petitioning their City Council for collective bargaining rights.

“There is absolutely no reason to chip away or repeal collective bargaining, other than to remind our public service workers, who power us through this pandemic, of how little the Commonwealth cares about them and the communities they serve,” said Delegate Elizabeth Guzman, who was speaking broadly against a package of bills that included HB 883, HB 336, HB 337, HB 341, HB 790. “We should not be talking about union work as a liability to communities when the opposite is true. Union work benefits communities. When our public service workers have a seat at the table and a voice on the job, they will use that voice to advocate for their communities so that they can better serve them.”

“Protecting the freedom to bargain collectively and join a union ensures that our valued public service employees are able to better advocate for the communities they serve and are better invested in those communities,” said Delegate Paul Krizek.

“Having served on the Alexandria City Council, I have a unique perspective on this bill,” said Delegate Elizabeth Bennett-Parker. “ We [Alexandria City Council members] unanimously passed a collective bargaining ordinance after listening to our community – I now represent three jurisdictions, all of which have chosen to pass collective bargaining ordinances.”

“Protecting the freedom to bargain collectively and to join a union ensures that our valued public service employees are able to better advocate for the communities they serve,” said Delegate Alfonso Lopez. “They are able to negotiate up-to-date equipment for emergency responders, smaller class sizes, adequate training, and staffing ratios in hospitals.”

All of the bills were advanced to their third reading and are on the House of Delegates calendar for a vote today. 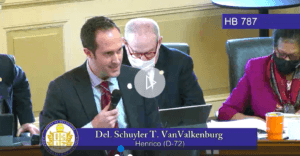 Senate Democrats Send Message on Crossover and What This All Means

Halftime: Where Do Senate Democrats Stand?

Senate Democrats laid out their take on Crossover and the hundreds of bills passed through the General Assembly so far.

RICHMOND, Va.: With Crossover complete and all Senate bills sent to the House of Delegates, Senate Democrats reflect on the hundreds of bills the Caucus has passed, and the defeats delivered to the Youngkin administration so far.

Majority Leader Dick Saslaw said: “For every Virginian, economic security and educational pathways to ensure that security must be attainable.

“Senate Democrats so far this Session have passed legislation to protect workers, address workplace safety particularly in terms of covid, availability of sick leave and family care, housing and food stability, and assurances for businesses to continue their growth in the Commonwealth.

“In terms of education, we have worked hard to help every single child have a pathway to prosperity at school and after graduation. From ensuring each student can learn without fear for their safety and stability to providing pathways for meaningful employment after graduation or after college, our top priority is the next generation of Virginians.

“I look forward to working with the House of Delegates to pass these bills as we further the business of the Commonwealth.”

“We are seeking equal opportunity in voting, the justice system, environment and energy, and education. Governor Youngkin has sought to divide, but Senate Democrats remain steadfast in challenging the status quo and helping those who need it the most.

“We stand up for all Virginians–no matter their zip code, gender, orientation, identity, ethnicity, race, or religion. We have stood together as a brick wall against threats to create communities of second-class citizens, and will continue to do so in the second half of this General Assembly Session.”