Monday, the Senate passed by a narrow vote of 20-19, HB585, sponsored by Delegate Schuyler VanValkenburg. The House of Delegates then approved the measure by a unanimous vote of 97-0. The bill now heads to the Governor’s desk for his signature.

Both Senator Ghazala Hashmi and Jennifer McClellan both spoke in support of HB585.  Watch their testimony, HERE. 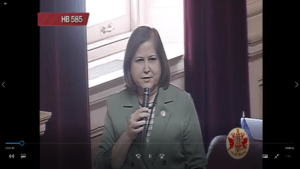 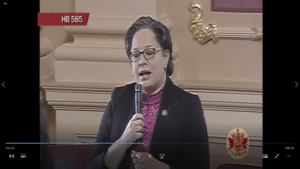 Budget Conference Underway and What You Can Do to Take Action

House and Senate conferees have begun meeting to hash out the conference budget. As Senate Democrats and House Republicans meet to hash out their differences, the word on the street is that the top items up for discussion will be the standard deduction, education, and health priorities.

VEA members and other coalition partners have been meeting with lawmakers and pushing hard to include the full At-Risk Add-On amount included in the introduced and Senate budgets. On school construction, we noted room for compromise by adopting the House selection criteria, which includes a share of students living in poverty and school infrastructure conditions, instead of using the Local Composite Index as suggested by the Senate.  See TCI side-by-side budget comparison to better understand budget details described below.

The Fund Our Schools Coalition, of which VEA is a coordinating member, has updated its Take Action page with rotating emails going to budget conferees asking them to prioritize K-12 funding in the final budget. Feel free to share this link or reshare social media messages going out via FOS Twitter, Instagram and Facebook asking folks to take action.

The VEA has also been reaching out to members to call key conferees, asking them to prioritize K-12 funding over more tax cuts and to hold the line on key priorities. VEA has also been having members send emails to conferees if they are constituents. (see a list of budget conferees and contact information below)

What can you do on budget advocacy?

Thanks to all of the members here for your incredible advocacy this session working to advance good school funding bills and killing many (many!) bills that would have redirected public school funding or restricted teaching of honest history.