Richmond Educators First to Break Through on Contract Negotiations

No one really knows who originated the old adage, “If you fail to plan, you plan to fail.” Over the years, it’s been attributed to Benjamin Franklin, Winston Churchill, and others.

Maybe it should now be credited to members of the Richmond Education Association, who took it to heart and, through careful planning, blazed a trail for their colleagues to follow. In a historic breakthrough, REA is the first VEA affiliate to convince their school board, under Virginia’s new bargaining law, to pass a resolution paving the way for contract negotiations between school employees and their school division.

Months before the General Assembly even began considering the bargaining law, REA members were mobilizing to make sure negotiations became a reality. They built momentum by circulating information about what a new law might mean for schools, students, and educators, gauging interest among their colleagues, and holding introductory meetings. 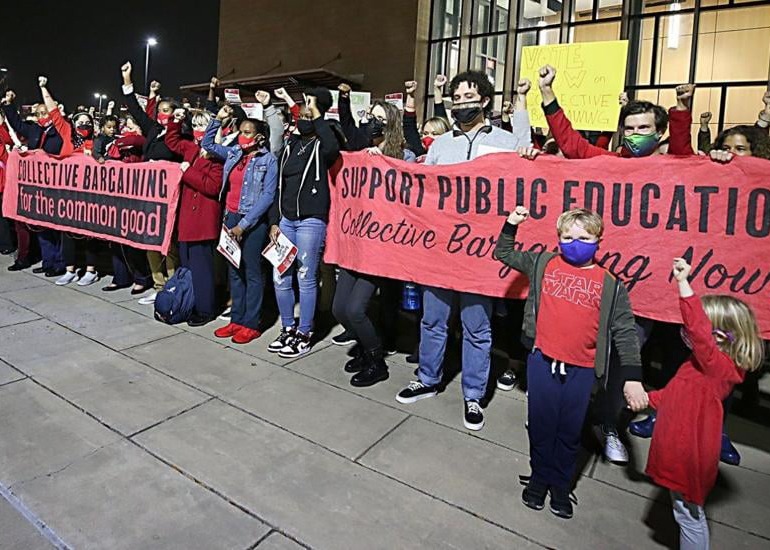 Educators in Virginia’s capital city began to jump aboard. For Andrea Dungee, a math interventionist and assistant testing coordinator at Oak Grove Elementary School, getting involved in the effort was an intensely personal issue. “Both my parents were educators,” she says, “and I watched them bring work home every day. They just didn’t have time to complete it during their regular school hours. Often, they were called into meetings or delegated additional duties that prevented them from finishing their tasks during the school day. I know how I felt when I wanted my parents’ attention but couldn’t get it because they had to work or were completely drained from the work they’d done. They could not say, ‘No, I have other tasks to do’ and were expected to take on additional work. I’m a parent now and I don’t want my child to experience me bringing home my work, sacrificing time or being completely drained, but unfortunately it does. I want collective bargaining so that families can enjoy each other.”

“We knew it would be a marathon, not a sprint,” says Young-El.

A core group stepped up and began holding meetings so other members could build the skills they’d need to both win the right to bargain and then do so effectively for students and school employees. Committees began meeting, on topics ranging from communication to event planning to getting the necessary authorization cards signed. REA members made school visits to provide accurate information, reached out to school board members and other leaders, and held rallies.

“Collective bargaining is an equalizer when dealing with the issues we face,” says Turner. “For many years, educators here have dealt with poor working conditions, such as crumbling buildings and inconsistent policies, but there’s been a pervasive fear of reprisal for speaking out about our concerns. This victory will illustrate how educators’ satisfaction with their working conditions holds positive impacts for the students we serve—that’s why we worked so hard to make collective bargaining a reality.”

Young-El points out that one of the most easily measurable effects of contract negotiations is improved teacher retention across a school division, something Melvin Hostman, a social studies teacher at Huguenot High School, would welcome. 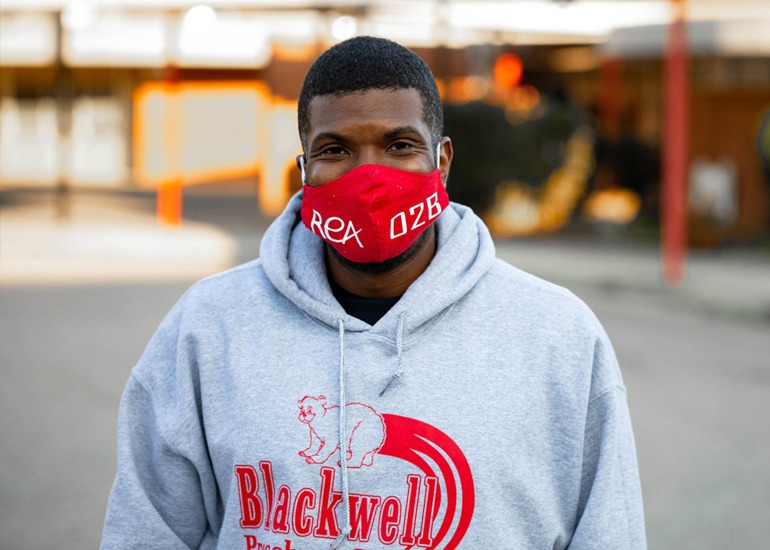 “Teacher retention is a pressing issue here,” says Hostman, who notes that he’s been in his school for four years and is already considered a veteran teacher. “The main reason for teachers leaving isn’t the kids and it isn’t the parents, it is the lack of autonomy in the classroom and the lack of voice in the district’s decision-making processes. We don’t even have clearly delineated job responsibilities, leaving teachers subject to the whims of administration. Collective bargaining will change this issue. My hope is that it will also help improve teacher retention in Richmond.”

Dungee agrees that bargaining would help clarify important issues. “That ‘other duties assigned’ phrase in our contract can be spelled out,” she says. “This would allow educators to say no. It would help with equality in the work environment by having accountability on every party. I want to help stop teacher burnout which collective bargaining can help assist with.”

As important as anything to REA members is the chance negotiations create to be given the long-overdue treatment as professional educators that’s often been missing since public employee collective bargaining was outlawed in Virginia in the 1970s.

“Think about all the hours we put in, all the degrees we have, all the experience we have,” middle school teacher and REA member Paige Ellwanger told the city’s school board during a meeting last fall. “All we’re asking for is a seat at the table so we can all work together.”

Hostman echoes her sentiments. “Every year the district makes policy decisions that make absolutely no sense to the teachers actually carrying out these policies,” he says. “Richmond education workers have not had a say in the conditions of their employment for over 40 years. Collective bargaining is the best way to begin to change this.”

Being at the table is also an opportunity for Richmond educators to share their expertise where it will matter most—in student achievement. Before bargaining was banned in Virginia, locals had used negotiations to strengthen instruction in ways that included creating smaller classes, setting better school calendars, modifying student discipline and safety policies, and bringing in more professionals, such as nurses, counselors, and reading, art, and music teachers.

Here’s how a statement from REA put it during the campaign: “Our contract is about more than how much we get paid or the hours that we work—our contract is also about the learning conditions of our students. By building strong relations with students, parents, and community partners, the REA intends to use the collective bargaining process to address long-standing educational needs and social injustices in our city.”

Contract negotiations are not a done deal for REA members yet, though, even after the school board’s action. The final steps include getting enough authorization cards signed by school employees to trigger an election to choose a bargaining agent, and then REA must win that election, which should be a formality as it’s the organization that made negotiations possible.

Allen is editor of the Virginia Journal of Education. 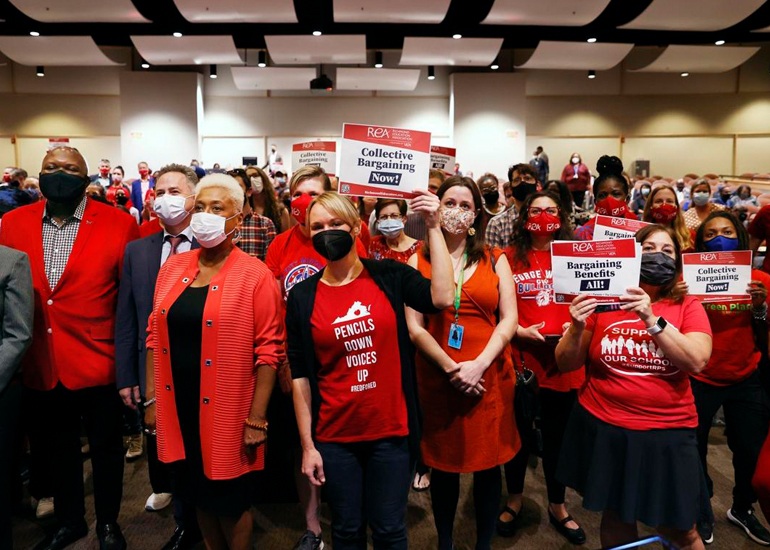 The Negotiations Movement is Spreading!

While Richmond educators were the first to break through on bargaining rights, other VEA locals are also hard at work. Here’s a sampling of some of the contract negotiations activity around the commonwealth:

Charlottesville Education Association. The city’s school board has made a public acknowledgement of its support for the bargaining process. At its January meeting, CEA President Jessica Taylor and Superintendent Royal Gurley stood together to ask that the process move forward. Local media reported board member Lashundra Bryson Morsberger telling educators this during the meeting: “You literally keep our children safe right now from both a virus and the threat of gun violence. I think that you’re owed the respect of having a formal voice at the table.” Taylor and UniServ Director Bekah Saxon have been asked to make an informational presentation at the next board meeting and CEA has begun gathering authorization card signatures.

Lynchburg Education Association. LEA has been building momentum for bargaining by making presentations at the city’s school board meetings. LEA President Karl Loos also had a letter to the editor published in December that said, in part, “Through collective bargaining, the decisions that impact the learning of our children are formed by the people that have the most impact on the learning of our children: the experts who are educated, licensed, and professionally trained to handle their unique position within the division. Collective bargaining allows employees to feel empowered and valued. It makes them love their jobs even more.”

Montgomery County Education Association. MCEA, which has now had authorization cards signed by a majority of licensed employees, formally submitted a resolution supporting collective bargaining in early January to the county’s school board and asked them to pass it.

In his remarks, MCEA President Glen Chilcote told the board, “This is a historic day. Public sector employees have been denied this right for decades…Employees of MCPS now have a unique opportunity to collaborate with you and make our students’ learning conditions the best they can be…There are a few myths about collective bargaining that I would like to dispel. Firstly, many individuals believe that the ability to negotiate one’s contract includes striking. This is false. Striking is illegal in Virginia and something our organization is against. Secondly, some individuals will say that the costs associated with collective bargaining are astronomical. Once again, this is false. Collective bargaining requires no extra personnel. Collective bargaining is simply the ability to meet with you and your representatives and through our shared vision create an environment where students can succeed to their fullest potential.”

Prince William Education Association. PWEA members have launched their bargaining effort by collecting signatures on authorization cards from educators at the county’s 94 school buildings. Prince William’s Board of County Supervisors has already voted to begin creating an ordinance to begin contract negotiations with county workers.