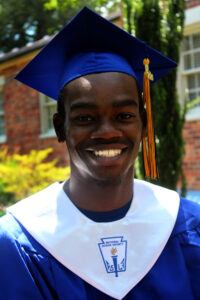 RICHMOND— Tyrell J. Newby, a senior at Surry County High School bound for Barton College in the fall, has been awarded the 2020Beblon G. Parks Scholarship by the Virginia Education Association.

The Parks Scholarship awards $500 to a high school senior who plans to pursue a career in education and is named for the VEA’s retired Director of Field Support, Organizing and Minority Engagement.

Newby has his eye on teaching history to middle school students, and has a broad perspective on it. “This will allow me to impact future leaders,” he says, “especially African American males. They need to see that they can make a difference within their school and community instead of being another statistic. As a role model, I will be able to be a mentor to some of them. Young minds are influenced by what they hear and see their elders do.”

While at Surry County High School, Newby completed dual enrollment college classes at John Tyler Community College, captained the varsity baseball team, was a member of the National Honor Society, served as president of the Recycle Club, and was involved in 4-H activities.

“He is always a positive young man,” says Mary Johnson, a counselor at SCHS. “He’s a stellar student and a positive role model for our underclassmen. I’m confident he’ll continue his level of excellence upon entering college.”

The more than 40,000 members of the Virginia Education Association believe that every child deserves a great public school.

Virginia is the 12th wealthiest state, but ranks 32nd in the US in teacher pay.