After nominee standoff, Youngkin is poised to appoint a majority on the Virginia Board of Education

A standoff over gubernatorial appointments will allow Virginia Gov. Glenn Youngkin to appoint a majority of members on the state’s Board of Education far sooner than expected.

After Senate Democrats refused to confirm Andrew Wheeler, Youngkin’s controversial cabinet pick for secretary of natural and historic resources, the Republican-led House of Delegates initially refused to take up a resolution confirming more than a thousand appointments made by former Gov. Ralph Northam to various state boards and commissions.

ADVISORY: Public Service Workers Call for Va. Senate to Be a Brick Wall and Defend the Freedom to Collectively Bargain

RICHMOND, Va. – Public service workers from throughout Virginia will call on the Senate to be a brick wall against legislation passed by the GOP-controlled House of Delegates that would repeal a 2020 law that has resulted in thousands of public service workers throughout Virginia gaining the freedom to join a union and bargain collectively for a contract.

Since taking effect last year, Delegate Guzman’s HB 582 and Senator Dick Saslaw’s SB 939 have triggered a slew of collective bargaining ordinances. Fairfax County, Loudoun County, Arlington County, the City of Alexandria, and the Richmond School Board have all passed measures to opt-in to giving their workers a voice on the job. Prince William County has taken a step in that direction, while workers in Virginia Beach, Portsmouth, Richmond, and Norfolk and teachers in Albemarle County and Prince William County are engaged in various stages of the process of securing collective bargaining rights. The Daily Press reported that Newport News public service workers are petitioning their City Council for collective bargaining rights.

Several lawmakers this week spoke up in opposition to bills moving through the GOP-controlled House of Delegates that would roll back protections for public service workers, including teachers, to join a union and collectively bargain.  Click on the picture below to watch each caption. 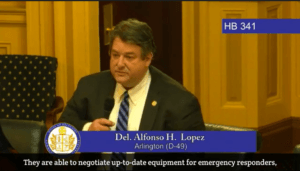 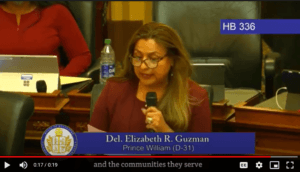 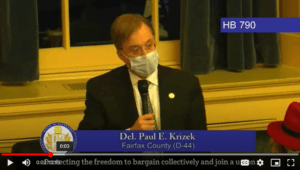 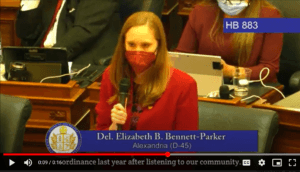