Summer Training Together, We Can Do Great Things

After sharing his experiences on the picket lines during a teacher strike in West Virginia in the 1990s, VEA President Jim Livingston looked out at the crowd at this year’s Reggie Smith Organizing School and solemnly told them what he’d learned.

“We are all we have,” he said. “We must stand in solidarity and do this work together.”

VEA members from across the commonwealth roared in response as they wrapped up three days of learning and preparing to do exactly that at the University of Richmond.

At RSOS and, for three days before that, at VEA’s revamped Leadership Academy, Union leaders immersed themselves in topics including digital mobilizing, communications, organizing around instructional issues, political action, helping immigrant students, and working with new educators–and came away with newfound friends, confidence, and action plans. 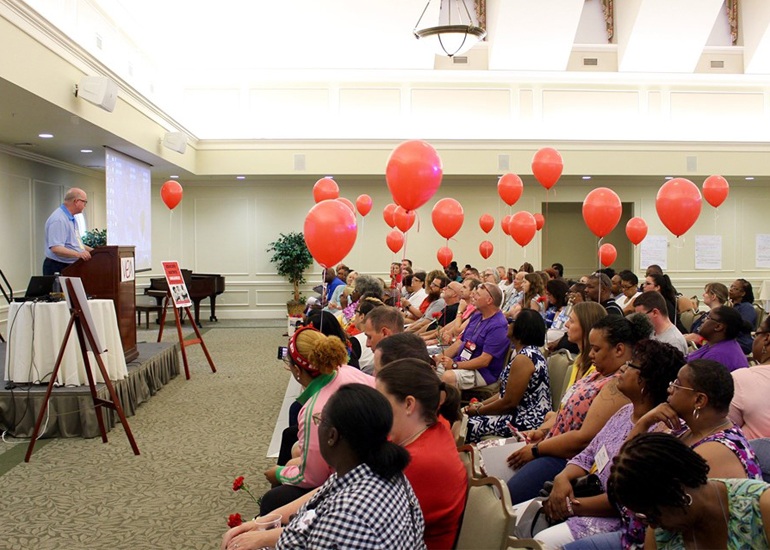 “The sessions really broke down how leadership should look in the Union,” said Darrell Turner, now treasurer of the Richmond Education Association. “As a new officer, those organizing principles were very important for me. Now I know how I should be recruiting new members, keeping them, and, most important, getting them involved.”

His sentiments were echoed by new Portsmouth Education Association President Gordon Jones. “I got a lot of the tools and information I’ll need to be a successful president,” he said. “They’ll help me motivate our members to do some great things.”

RSOS has been redesigned into a three-year course and 2019 marked the first graduating class, whose members were saluted with balloons and music during a rousing closing ceremony.

Other areas of focus for attendees at both three-day sessions were the Fund Our Future campaign, next year’s VEA Lobby Day plans, and understanding the state’s complicated school funding formula.

According to a poll conducted by Virginia Commonwealth University, 70% of Virginians say public schools do not have enough funding to meet their needs.