Celebrating 150 Years of Advocacy For Children and Public Education

A spark ignited a fire in downtown Petersburg in late December 1863. No buildings burned, and no one was injured. In fact, few even noticed the flame—yet its energy continues burning today throughout the Commonwealth of Virginia.

Fifty men gathered at the First Baptist Church, brought together by something akin to religious zeal. In fact, several of them were men of the cloth. Some were soldiers. Their purpose was not to worship or to fight, but to find a way to support their profession of teaching.

Virginia was the epicenter of the Civil War, with most of its able-bodied men, including its school masters, called to fight. Those who remained struggled to keep their schools, mostly private academies, open for the benefit of their students.

As the war raged, school buildings were commandeered, textbooks and learning materials were destroyed, and most education of young people ceased. During this conflagration, a small group of educators in Petersburg invited their colleagues in Richmond to join them in calling for the creation of an organization that would accomplish two goals—one immediate and one enduring: 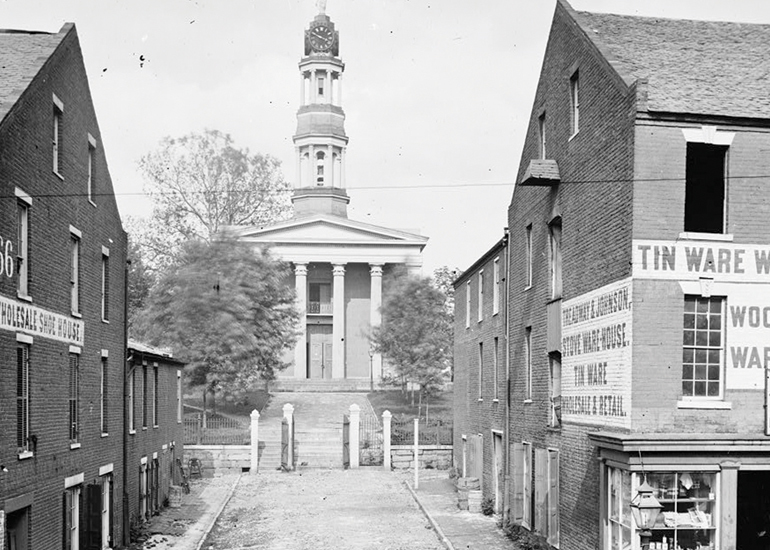 The group convened on December 29, 1863, in the church’s basement lecture hall at the corner of West Washington and Davis streets in Petersburg. After extended discussion and the adoption of a constitution, they adjourned on December 31 with plans to meet again the following July in Richmond. The war delayed that meeting until 1866, when educators gathered in Charlottesville to begin building their union, which they christened The Educational Association of Virginia.

This organization operated for several years, holding annual conventions focused on topics of curriculum and pedagogy until1882. Attempts were made to re-establish the organized profession over the next several years, leading to the creation of the Virginia Teachers Cooperative League in 1898, the continuing organization now known as the Virginia Education Association (VEA).

A parallel organization, eventually known as the Virginia Teachers Association (VTA), organized in 1887 to promote the education of black students and the professionalism of the teachers who served them. The VTA and the VEA were the first among the former Confederate States to unify under a single professional organization in 1967.

The Journal has provided a communications means for educators, carrying the torch for professional development and advocacy for education that the VEA’s founders sought on those winter days in late December 1863.

In 1867, the young organization called upon the state to organize institutes to further the professionalism of teachers. The resulting summer institutes became the vehicles of professional development for several decades, with speakers focusing on practical as well as theoretical learning.

As part of the continuing effort to improve the quality of teachers, in the 1880s both black and white educators formed Reading Circles to share professional ideas and strategies. 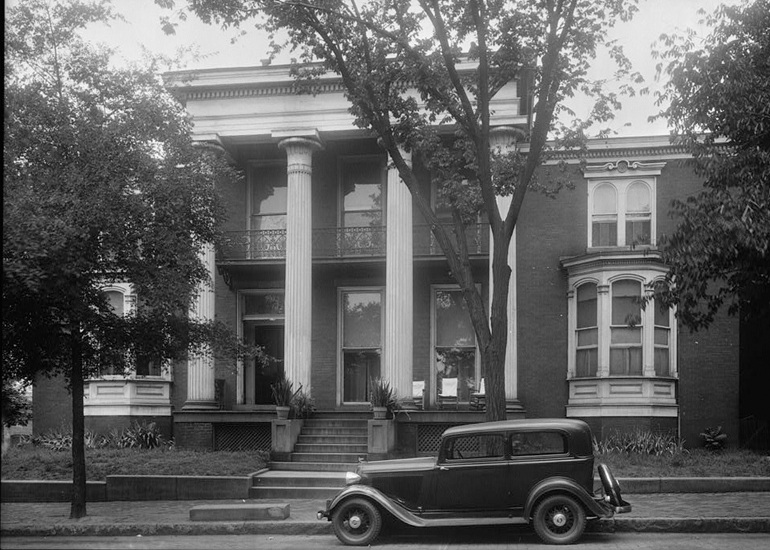 With the encouragement of teachers and school leaders, in 1882 the General Assembly created two normal schools for teacher education—one for white teachers at Farmville and one for black teachers at Petersburg.

As the early public schools were being created, educators supported certification for superintendents and for teachers. And in 1913, the VEA adopted its first Code of Ethics for educators. The VTA adopted a Creed for Teachers in 1915.

The Association continues to conduct conventions and conferences to provide opportunities for teachers to improve their skills, focusing more and more on teachers developing and presenting training to their colleagues based upon their personal experiences in the classroom.

In more recent years, the Association has supported the creation of the National Board for Professional Teaching Standards; encouraged and supported members in achieving national certification; and lobbied to ensure state funding to provide salary supplements for those who succeed. 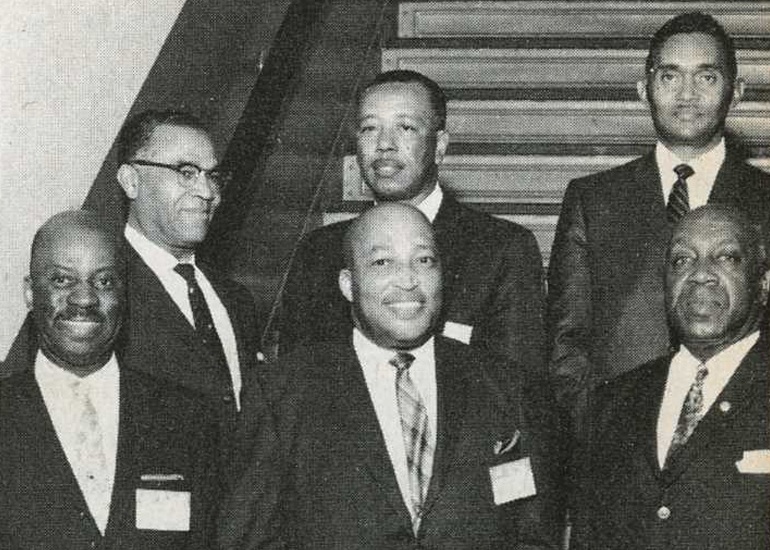 Advocating for human and civil rights

Although the white VEA and the black VTA occasionally worked together from the early 1920s, they remained separate entities. Many members of both organizations, however, were members of the National Education Association (NEA). The VTA and the NEA worked closely to provide equity among black and white teachers and students.

In 1939, a suit was filed for equal pay in the name of Aline Black, a teacher at Booker T. Washington High School in Norfolk. The case, denied by the Virginia courts, was appealed to the U.S. Supreme Court by attorney Thurgood Marshall, resulting in the 1940 ruling that salaries of white and black teachers with the same training and qualifications must be equalized. The story lacks a happy ending, however: According to the 1975 book History of the Virginia Teachers Association, “In a stark example of revenge, Miss Black was dismissed from her teaching position.”

When some districts closed public schools following the 1954 Brown decision by the U.S. Supreme Court, the VTA and NEA worked to provide sustenance and jobs for teachers and schooling for students who were displaced.

Black teachers and white teachers committed to the process of unifying their talents, their resources and—more importantly—their dreams for the future of public education in Virginia when their two organizations merged in 1967.

VEA’s history since then has been one of inclusion and advocacy for all students as well as for all teachers and public school employees. Former VTA President Fitz Turner became the first black educator hired by VEA shortly after the merger and, in 1976, Mary Hatwood became VEA’s first black president. She was followed by Cheri James in 1996 and Princess Moss in 2004.

In 1977, the VEA created the Fitz Turner Commission for Human Rights to oversee and conduct Association programs that enhance the growth and quality of relationships among Virginia educators.

VEA has worked to weed out discrimination based upon other factors, as well. In 1972, the Association won a court ruling that protects the jobs of teachers who are pregnant. In 1975, it won back pay for teachers who were forced to resign because they were pregnant. And in a little-known but important action, VEA successfully challenged a 1970 ruling by the state attorney general that would have forbidden a husband and wife from working in the same school division.

Today, as Virginia’s population continues to grow more diverse, the role of the Association in advocating for the human and civil rights of all children and school employees is more important than ever.

Advocating for Teachers and School Employees

Beginning with the creation of public schools in 1870, the Association has faced the challenge of securing salary, benefits and working rights for educators.

In the very early years, the school term was so short (usually five months) and funding so scarce that no teacher could survive on the meager salary offered. The state’s early teachers sometimes even were punished with reduced salaries because attendance dropped in their schools, leading them to be recruiters as well as educators.

One of the first legislative goals of the early school advocates was to create a statewide teaching salary and to establish a common day on which teachers were paid.

In an effort to encourage teachers to continue in the profession, the Association won the creation of a pension plan in 1906. Expansion of retirement benefits and funding for pensions has been an ongoing Association goal ever since.

One of the first Association programs to improve teachers’ welfare was securing a charter in 1880 to provide life insurance for teachers at one-third off the going rates. The Association today continues to use its group buying power to provide financial savings for members.

Before health insurance became a common benefit of school employment, VEA joined with the University of Virginia, in 1929, to create the Preventorium at the University Hospital. It provided medical treatment for teachers at reduced costs for the following 50 years, closing in 1970.

Virginia’s tendency not to treat teachers as professionals has been a continuing challenge for the Association. VEA has been at the forefront to securing employment rights for the profession, leading to the adoption of continuing contract guarantees beginning in 1968, a protection being threatened in the General Assembly today.

In 1972, VEA invited teacher’s aides and school secretaries to become members; in 1981, all education support professionals were welcomed into membership. Today, VEA continues to offer ESPs the same support and benefits as it does to teachers.

VEA’s work has produced sick leave and duty-free lunches for educators as well as grievance procedures to provide resolution of disagreements between school employees and their employers. 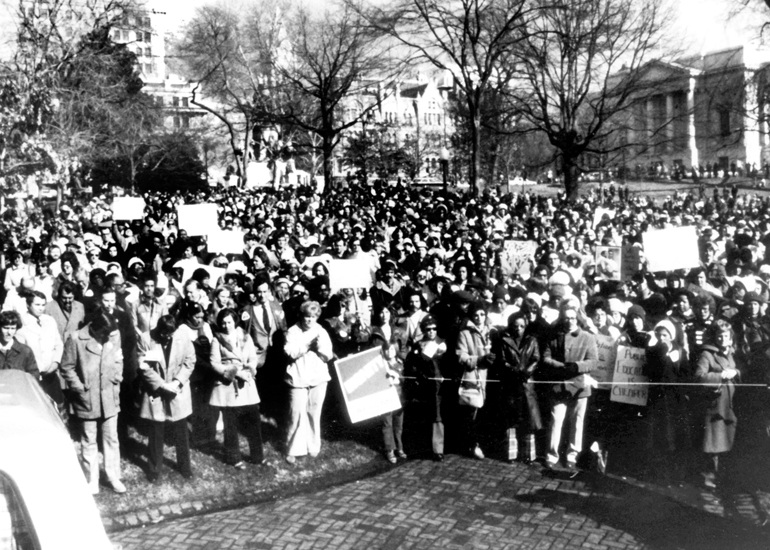 In 1970, VEA established the VEA Defense Fund to pay for cases protecting school employee rights. Today, these cases are funded jointly by VEA and NEA. In 1974, VEA expanded its staff to provide professional support for members through service centers located throughout the state.

While life has significantly improved over the years for teachers and school support employees, there is little question that the effort is an ongoing quest. As Virginia and the nation face the current economic downturn, a strong and aggressive Association is every bit as important today as it was 150 years ago.