Education Activism: From Analyst to Advocate

How one educator found his voice and spoke up for schools, students, and educators.

When I started teaching in the late 2000s, I prided myself on keeping my opinions to myself. My views were my own, and I thought it best to keep them out of the classroom and remain focused on content. Before entering the classroom I was an archaeologist, so my goal was always to teach my students to analyze the data and draw their own conclusions. But over the years, the content I teach and the views I hold have become more intertwined, like a Venn diagram where the circles become more and more overlapping. At times I felt like it put me in a difficult place, because as educators our default mode is often to stay quiet. “Don’t rock the boat.” “Keep your professional and private life separate.” So, I was wary about how the things I did outside of school might make my life inside it more difficult. For a while I always erred on the side of caution, and even today I keep a pretty thick wall between my home and school lives. 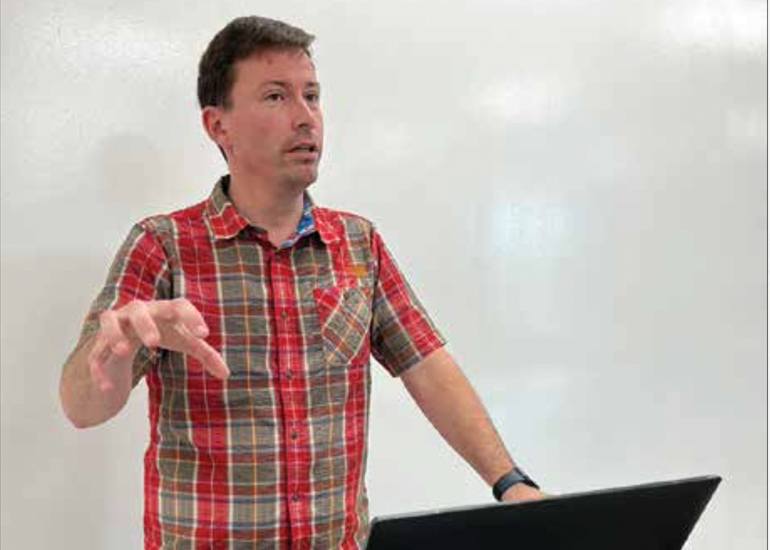 But what about if you get the opportunity to speak out on something that can positively affect your school? Sometimes rocking the boat can lead to a needed course correction.

I began to speak up about things I felt were important about five years ago, when earnest debate began between Staunton’s City Council and School Board about what should be done to improve our aging high school, then called Robert E. Lee. The ideas ranged from modest renovations to an entirely new school on a new site. The potential for a new building, in addition to a shorter commute, was one of the main reasons I took a position with Staunton City Schools. But, as I started attending City Council meetings, I worried that the need for a new school was being lost in the conversation.

I heard comments at those meetings like “I went there and I turned out fine” and “The building’s not that bad.” My daily experience, however, was poor ventilation, spotty air conditioning and heat, and tiny hallways. I thought the need for a new building was self-evident to anyone who had stepped into Robert E. Lee, but it became clear that a lot of speakers during these meetings never went beyond the auditorium or gym which, in their defense, were in decent shape. I rarely got members of the general public in my classroom, with its lack of hot water and leaking ceilings.

Someone needed to tell that story, so I decided to speak.

Getting up to the podium to speak during a public meeting is a nerve-wracking experience. It still gives me butterflies. The irony that my day job is to get up and speak to groups of people isn’t lost on me. But there’s power in finding out you have something to say, and once you start, people will probably listen.

The time limit for comments was five minutes, so I had to pare down my usual rambling, tangent-filled speaking style. I didn’t just want to read something word for word though, so I developed an outline and practiced getting through my message in the allotted time while also attempting to use my normal speech patterns. I found planning to be key. Some people can get up at meetings and speak off the cuff when they feel moved to, but that’s a little too “seat of your pants” for my taste. So, I spoke at one meeting, then I showed a PowerPoint at the next. Yes, most people only speak during public comments but check ahead of time with your local government, they can probably accommodate you if you’d like to present some form of media. After that I shared the presentation with anyone I could. I went to work sessions to hear debate and emailed my thoughts directly to Council members when I had something to say I thought wouldn’t fit in the limited time frame available during Matters from the Public. Did it move the needle? Honestly, I’ll never know, but in the fall of 2020 we opened the new Staunton High School, where I continue to teach and one day my children will attend. We didn’t get a new building on a new site. The aforementioned gym and auditorium, because they were in decent enough shape, were saved and the new school was built where the old one was. Today, the new school is something the whole town can truly be proud of.

In the summer of 2020, like most school divisions in Virginia, Staunton was deciding what to do about returning to school in the age of COVID. Virtual? Hybrid? How many days a week? How best to educate? Once again, we were changing everything and no one knew exactly how it would work out. But members of the Staunton Education Association worked to gather data and advocate for ourselves and our students. We sent surveys, wrote letters to the editor, met with board members, and when the year started we had a plan in place that most educators felt at least partially comfortable with.

One of the silver linings of COVID was that both as an individual teacher and as an association, we had opportunities to speak and an audience (superintendent, board, community) that was willing to listen. We spent half the year fully virtual teaching on Zoom and the spring in a hybrid model that included both in-person and virtual. Again, there were some successes and some areas that needed work, but by the end of the year we’d made it. As isolating as teaching has seemed at times over the past two years, I felt we were forging new ways to communicate and strengthening relationships, even if we weren’t always in the same room together.

And now, another school year unlike any other is almost (or already) in the books. Again. Never did I think I would live in such unprecedented times that they would become precedented. “Paradigm shift,” “the new normal,” “sea change”: every few weeks it was a series of extreme events that once again asked us to accept the fact that the world we went to sleep in the night before no longer exists. 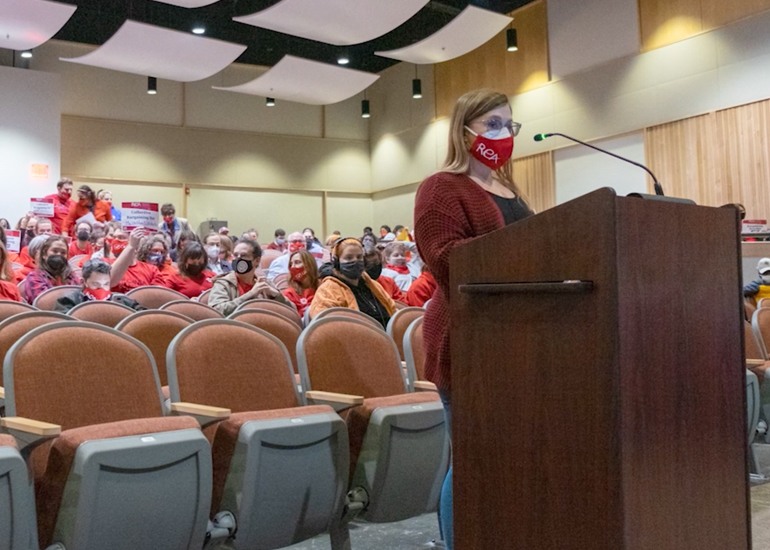 One thing, though, that never seems to change is the lack of adequate school funding. In my 15 years working in the Virginia public school system, I’ve never seen a budget that I wouldn’t consider bare bones or the absolute minimum. This past January, it became clear that in addition to the uncertainty of the state budget, which remained unfinished as I wrote this, the funding Staunton City Schools would be requesting from the city would probably not match the level of funding the city was willing to give. With state level funding not yet determined, the best option to secure the funding students and educators needed in Staunton was to petition the city for the additional requested money. But this time, the voices calling for change wouldn’t just be educators, but families, students, and other community members, as well. Yard signs went up around town, City Council meetings were flooded with parents, educators, and students, and there was even a “bake sale” held one Saturday to raise awareness of the need for increased government funding, rather than forcing schools to fundraise for themselves.

It was the best show of community engagement I’ve seen since I’ve lived in Staunton, and it worked. The City Council and the School Board were able to come to a compromise that fully funded the district for fiscal year 2022-23. In addition, I was inspired by the number of community members that realized this wasn’t a “one-and-done” issue. This was clearing a hurdle, but there are several more (getting rid of the state level support cap comes to mind) to go. While that might seem discouraging, I look at it as an opportunity to take the lessons we learned this year and carry them into the future.

So, while it might seem daunting, I encourage all VEA members to speak out on the issues that matter to you, be it through an email to an elected official, in person at a government meeting, or in another format that plays to your strengths. It might be just you at first, but you’ll probably pick up some supporters along the way. I know I did.

Some tips I’ve picked up over the years:

Lawrence, Vice President of the Staunton Education Association, is an ecology and astronomy teacher at Staunton High School.

You (Yes, You) Can Make a Difference!

Here are some steps you can take to help you become an effective advocate for public schools, your students, and your colleagues:

• Share information that you receive from the VEA and your local with fellow union members.
• Know the people who represent you. This includes not only your delegate and senator, but your school board and board of supervisors/city council members.
• Attend your local school board meetings and bring fellow union members with you. Tell your story during public comment.
• Do your homework. You need to know what you’re talking about. How well have you researched your concern?
• You don’t have to go it alone. You’ll probably discover that many of your issues are shared by fellow members. Reach out to your local leaders, building reps or UniServ Director about getting more involved in the union.
• Craft your own message. Consider becoming a VEA online advocate. Share your personal stories and experiences. You can learn more at vea.link/advocacy.
• Focus on solutions, not problems. Rather than identifying what’s not working, focus on how additional progress can be made.
• Communicate face-to-face if you can. It’s easier to write, and a one-way conversation is good, but a dialogue is better. Plan a meeting with an elected official (school board, city council, board of supervisors, House of Delegates, VA Senate) and talk to them about your work and what you need.
• Get involved with the VEA’s Fund for Children and Public Education and be sure to vote!