On Monday, despite major objections to SB739, the House of Delegates voted in favor of removing local decision-making power from local school divisions on decisions to move to virtual instruction in cases of emergency.  Watch the House floor debate HERE. 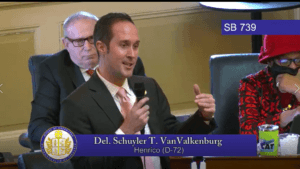 The House of Delegates passed SB739 by a very narrow margin of 52-48.    In its current posture, SB739 is a major overreach of power by the state to control the local school divisions decisions on whether to move to virtual learning options in cases of emergencies, such as threat situations, HVAC related emergencies, or other types of emergencies that could affect the safety and health of students.  In addition, schools are experiencing major teacher, substitute teacher, and bus driver shortages.  Over the past months, we have seen many schools shut down periodically due to these shortages.  SB739 would prevent the district from moving to a virtual learning scenario in these types of situations.  It’s likely that the Governor will place an emergency clause amendment onto the bill to make it effective immediately.  Once the amendment is added to the bill, it will return to the state Senate and House of Delegates for an up or down vote of the majority.

HB1272, the House companion bill to SB739, was passed to third reading final passage on Monday, but not without major objections.  Watch the House floor debate on HB1272 HERE. 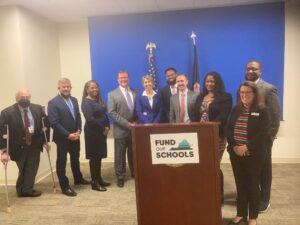 The memorandum on behalf of Fund Our Schools (the largest P-12 education advocacy coalition in the state representing parents, students, educators, school staff, community advocates, research, and other community organizations), the Coalition of Small and Rural Schools of Virginia (representing 80 school divisions), and other signatory organizations shared the collective
recommendations for K-12 budget investments in 2022 proposed House budget.

The recommendations for K-12 investments in the memorandum are grounded in evidence-based approaches that have been shown through rigorous studies to improve student outcomes and well-being. The recommendations were also informed by stakeholders who work, learn and collaborate in schools. “Based on experiences from other states and divisions, we know school staffing shortages, lost learning time, and trauma can be mitigated if lawmakers take quick and strategic action”,  explained VEA President James Fedderman. “We believe that actions to provide immediate relief this year, coupled with policies to modernize schools and build our workforce over the long term can abate some of the most harmful impacts from the pandemic and set Virginia on a track to lead the nation in education outcomes.”