Thank God for caring, excellent teachers. This thought—maybe even a bit of a prayer—has occurred to me many times over the past year as parents shouted at school board meetings and the governor announced a state-sponsored “tip line” offering the public the chance to report any teacher who dares to discuss “divisive concepts” in Virginia classrooms. Some of those concepts include shackling, raping, selling, and enslaving people, or restricting voting rights for Black citizens, as Virginia did in 1902. Or, in the 1957 case of Richard and Mildred Loving, arresting and exiling a married couple of mixed races for the crime of loving each other.

“Divisive concepts,” indeed. It worries me for great teachers, like two who taught me English when I was in high school. More on them shortly.

As a former journalist and author in Richmond, I’ve watched with both horror and astonishment at how the bad old days can repeat themselves—as if the progress made during the Civil Rights era is being run in reverse. Commenting on Gov. Glenn Youngkin’s executive order setting up the tip line, Pulitzer-winning columnist Michael Paul Williams commented in the Richmond Times-Dispatch, “[Governor] Youngkin seeks to stymie an accurate and comprehensive telling of the story” of Black history “by encouraging people to snitch online against teachers whose lessons stray beyond the boundaries of what students—or their right-wing parents—deem comfortable.” 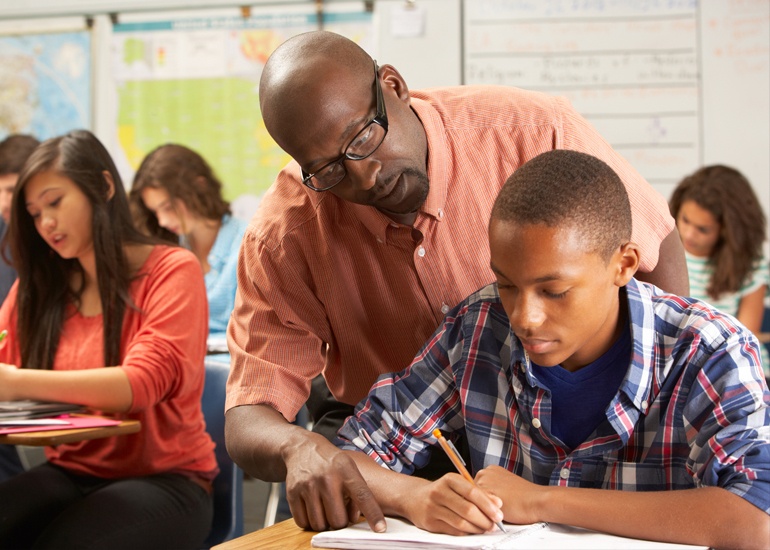 Citing “a war on educators,” Williams shared a text from a worried teacher who said she was “bracing myself” for attacks by self-appointed classroom censors. Even though the cynical efforts at censorship didn’t gain much traction in the 2022 General Assembly, the entire episode remains alarming—yet also instructive for Virginia’s educators. Indeed, the whole misguided campaign to censor teachers provides more than its share of lesson plans, especially in light of the censorship and propaganda used by Vladimir Putin to try to hide the invasion of Ukraine from his own people.

Other timely lessons can be drawn from what happened in east Tennessee early this year when a school board banned Maus, the critically-acclaimed graphic novel by Art Spiegelman. The two-volume work details his family’s Holocaust history through a series of conversations between Spiegelman and his estranged father, according to The Washington Post. It also delves into the painful death of Spiegelman’s mother, a death camp survivor who died by suicide when her son was 20.

“Maus” allowed Spiegelman to connect with his painful past while also explaining the Holocaust in a creative way to a new generation of readers. And like Orwell’s other cautionary tale about totalitarianism, Animal Farm, it used animals as characters.

Given the current toxic atmosphere of technology, politics, racism, homophobia and misogyny, 2022 brings to mind yet another cautionary tale about the dangers of censorship: Fahrenheit 451, by Ray Bradbury.

He imagines a dystopian future when society grows so lazy and media-drenched that the government enforces its will by turning firemen into book burners. Thus its title — based on the temperature at which paper bursts into flames.

Are you getting a whiff of today’s headlines?

In our common struggles against censorship, I was struck by how Bradbury’s protagonist, Guy Montag, has his mind changed not by an adult, but by a teenager. Clarisse McClellan’s intellectual freedom inspires him to flee his fellow book-burners. The student, in other words, becomes the teacher!

Bradbury penned Fahrenheit 451 at the height of the McCarthy hearings, when the paranoid, alcoholic Sen. Joe McCarthy set up his own “tip lines” in order destroy lives and ruin reputations.

Given today’s attempts to weaponize reading and teaching, Bradbury’s clarion call rings as loud and clear as ever. Thinking back on my own education, I have found one silver lining in these stormy times: they’ve allowed me to reconnect with two of my own English teachers who gave me the priceless gift of a lifelong love of reading and writing.

So, for example, in one unit, we read Ken Kesey’s One Flew Over the Cuckoo’s Nest, which served as both a scathing critique of America’s treatment of mental illness and a dramatic allegory about conformity. In another, we laughed at Cat’s Cradle, Kurt Vonnegut’s clever, but deeply worrisome, tale of environmental doom.

As a military brat, one particularly mind-bending literary experience was

Joseph Heller’s antiwar novel, Catch 22. Though I wasn’t actively opposing the exhausting, deadly war in Vietnam, the act of reading Heller’s satirical masterpiece felt slightly subversive. That’s because, my father, a highly-decorated officer in World War II and Korea, was commanding thousands of Marines still fighting for their lives near the DMZ between North and South Vietnam.

I don’t think my young English teachers were being intentionally subversive. But by offering such a wide range of titles, I can now see how they managed to prepare me to confront many of the challenges of today’s polarized and agitated age. Along the way, they managed to leave an amazing legacy of lifelong learning, one that was firmly rooted in the joy of reading. 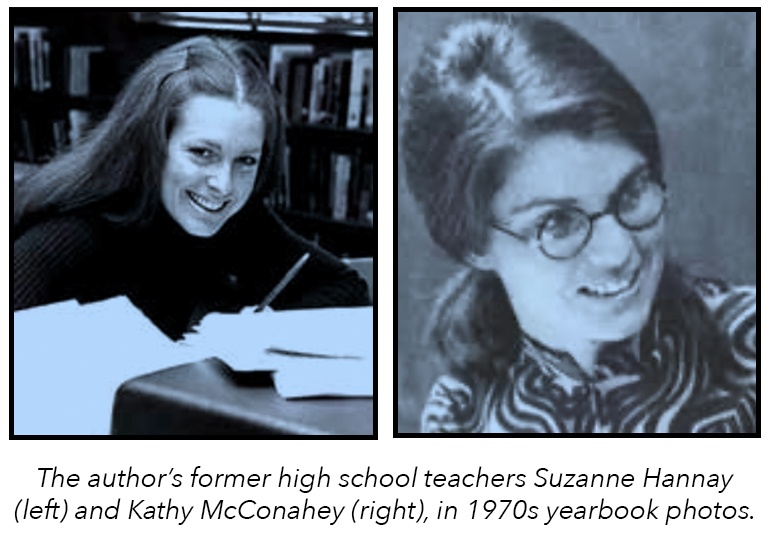 Smart and witty, Mrs. McConahey and Miss Hannay managed to pry open our sheltered suburban minds. Isn’t that what we want from our public schools, the key laboratories of this ongoing experiment called America?

One day in the middle of my senior year, Mrs. McConahey played a vital role in my life. This happened after I got into a heated argument with my basketball coach in the locker room after a crushing loss. I wound up quitting the team a nanosecond before he threw me off.

The next day in English class, Mrs. McConahey noticed something was bugging me. Sitting behind her desk, she seemed to look right through me.

After more than 50 years, I’m not sure how I replied. But I do remember how her simple, yet sincere, query opened my emotional floodgates. Out spilled the story of losing my lifelong hoop dreams … then came the tensions about having my father over in Vietnam and how this worried my mother… Then something deeper poured out: The pain of losing my brother in a car crash several years before.

One by one, I shared my doubts and pains. Afterward, Mrs. McConahey managed to fill the void left by my deflated sports career. Now I was reading outside of class – not for extra credit, but because I wanted to—or rather, because I had to! It was like my brain had been simmering on a pilot light for most of my 17 years. All it took was a smart, sympathetic teacher to light its fire.

Many of the books I recall reading during my personal awakening a few months before graduation dealt with the experiences of Black authors in America –such as Native Son, by Richard Wright, Manchild in the Promised Land, by Claude Brown, and Soul On Ice, by Eldridge Cleaver.

Today, one passage from Cleaver’s essays rings especially true: “If a man like Malcolm X could change and repudiate racism, if I myself and other former Muslims can change, if young whites can change, then there is hope for America.”

Hope. What a divisive concept!

But if Mrs. McConahey were teaching in Northern Virginia today, would someone dial the governor’s tip line to complain? Would some parents scream for her removal?

If they do, though, I hope today’s Mrs. McConaheys and Miss Hannays – and their principals and school board members – keep fighting for open minds and caring hearts.

Jones is the author of The Organ Thieves: The Shocking Story of the First Heart Transplant in the Segregated South. It won the Library of Virginia’s 2021 Literary Award for Nonfiction and has been chosen by Virginia Commonwealth University as the Common Book for 2022. He can be reached at chipjonesbooks.com.