How COVID Has Shown Us That Public Schools Remain Indispensable

Our public schools have always been the nation’s go-to institutions for not only teaching our young people and readying them for the workforce, but also to prepare the next generation of active, responsible citizens, uniting us, and providing needed social structure and services.

We all benefit from public education. Every day.

That may never have been more true than it is right now, as our country begins to bounce back from a devastating pandemic that has forever changed our lives. We’ve closed school buildings for extended periods and had to find new ways of making public education work. Reopening schools has been and will be challenging, compounded by the fact that students and educators are coming back to those buildings carrying the effects of a difficult, stress-filled time.

Positive aspects arise after almost all crises, however, and one of them here may be an increased awareness and appreciation of how much we need our public schools. Not only are schools and educators coming through with keeping learning alive during COVID-19, they’re providing meals, support, a sense of community, and vital social services.

Here are just a few reasons COVID has shown Americans how much we rely on our public schools, from “For the Common Good: Recommitting to Public Education in a Time of Crisis,” a report by the Center for Education Policy:

Public schools must be available to all students, free of charge, and they have continued to be there for all students even in times of trouble.

Public school districts are required by law to educate any student, regardless of income, race, ethnicity, academic level, disability, immigration status, language proficiency, or other background characteristics or needs. Although private schools are important to many families, they are not meant to be a universal system. They are limited by geography, may be expensive, and may have selective policies for admitting and retaining students. Our public schools educate about 90 percent of our elementary and secondary students.

As the nation moves toward an uncertain future in the wake of COVID-19, it will take a greater level of public support to ensure that public schools continue to operate, and that public school teachers and leaders can continue doing their jobs.

Early advocates saw public schools as means not only to develop an educated citizenry, but also to create cohesion among disparate groups and social classes, build economic strength, and eliminate poverty, crime, and other social problems. While these noble purposes have not been fully met, they are as relevant as ever.

Public schools have long been considered the primary institution for educating students about our system of government and preparing them to participate in civic life. Civic education is especially critical in the current context.

Our democracy depends on having educated citizens who understand political and social issues and who will exercise the right to vote, act to protect their rights and freedoms, and resist tyrants and demagogues. Not only are public schools responsible for teaching civics and government, but they are also one of the first places where children form a community with others outside their families and practice skills they will use in civic life, such as making group decisions and handling disagreements.

The pandemic has underscored the importance of civic knowledge and civic mindsets. Americans have been asked to make sacrifices to protect others. They have watched debates about the responsibilities and powers of different levels of government play out in front of them with serious consequences. People must sift through an outpouring of conflicting and confusing information to distinguish fact from fallacy. They have seen first-hand the impact of government policies and, in many cases, have gained a new respect for competence in government, expertise in public institutions, and dedication to public service.

Public schools are the main places that bring together young people from diverse economic, social, racial-ethnic, and religious backgrounds for a major part of the day.

When students from diverse backgrounds learn side-by-side, they have opportunities to find common ground and acquire skills needed for getting along. Although this ideal has been thwarted at various times by practices ranging from outright discrimination to more subtle forms of student tracking, public schools remain the primary societal institution where children are likely to interact with peers different from themselves.

Public schools are places where community members come together for meetings, recreation, entertainment, voting, and other activities. In some small, rural communities, schools are the only public building suitable for these purposes, and the loss or consolidation of public schools can have a negative ripple effect when the community loses this anchor. When parents send their children to public school, they become part of the larger school community and are more invested in the success of the school system. And when people support their local public schools through their taxes, time, and voluntary efforts, they are exercising a civic responsibility that benefits the whole society. If we let public schools falter, we lose an important source of social glue.

At the most basic level, COVID-19 policies have made clear how much working parents rely on schools to take care of their children while they do their jobs and how much family schedules are geared to public school schedules. Public schools do much more than provide a place of learning for children. For example, they also provide lunch to more than 29 million students each day and breakfasts to almost 15 million; these school meals may be the most reliable source of nutrition for some children from low-income families. Many schools also provide health care through school nurses, before- and after-school programs, counseling, recreation, substance abuse prevention, and safety and violence prevention. At some public schools, entire families can access a variety of social and community services. School closures related to the pandemic have made clear just how important these services are, and many school districts have continued distributing meals at pickup points. 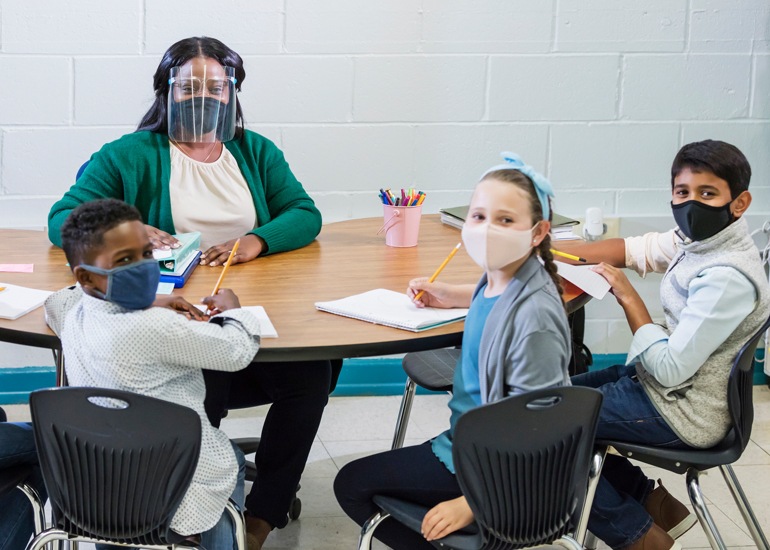 Public schools will play a key role in dealing with the long-term effects of the current crisis.

The pandemic has exacerbated already wide disparities in wealth and health. Americans at the lower rungs of the economic ladder have been harder hit by exposure, illness, and layoffs. The nation can expect a long, difficult period that will negatively affect the economic stability of families and the learning and well-being of many children. Public schools must be ready to deal with an increased number of children and families with serious educational and social needs. To do this job, public schools will need support from all Americans, not just parents with children in public school.

COVID-19 has made the multiple contributions of public schools more visible and has reinforced the need for strong and effective public institutions, but it has also exposed the stubborn inequities that have made public education a target for those who would like to radically change the mission of public schools. This debate will likely become even more intense when public schools reopen, as local systems try to meet the needs of students and staff with far less funding and far more ongoing disruptions.

While the pandemic has unsettled schooling across the nation to an extent unseen since the 1918 flu epidemic, it is important to remember that the U.S. public education system has proved its resilience in overcoming many other unexpected or traumatic events, including the Great Recession of 2008, a spate of tragic school shootings, and a series of natural disasters. Although these occurrences have wreaked havoc on school systems large and small, public schools have managed to adjust and move ahead with the business of educating the vast majority of the nation’s students. Still, helping schools rebound from this crisis will require a deeper public commitment and a stronger political will than has been evident in recent years. Even if people are not yet able to come together physically in a public space, it will be important for them to come together metaphorically.

The public education system that emerges from the crisis will be different from that of the past, but at this critical moment, there is an opportunity for communities to come together and recommit to a better, stronger future for their public schools. If we have learned anything from this period of distancing from each other, it is that communities need to think holistically about how public institutions, like schools, serve and reinforce the nation’s longstanding commitment to the common good. We all have a role to play as the nation moves to recover and rebound from this crisis. If we use this moment to both reflect on the past and innovate toward the future, the result could be a more equitable and effective public education system.