Look Past the Surface to Make Real Connections

As an African-American male, I know I’m out of the norm for most of my fourth-grade students. Each year, I tell them, “You know, I may not fit the image that many people have when they think of an elementary school teacher, but being here with you all fits me. Now, I want to know what fits you. Tell me, who are you?”

In this way, I truly try to begin making a solid connection with my students. I take time to learn about their personalities, behaviors, backgrounds, and curiosities, and their thoughts about learning. I want to be known as the teacher who cares, not just the African-American male elementary school teacher. Kids need to know that our backgrounds are invaluable but that there’s always more to us.

I’ve learned that creating bonds is one of the most essential tools in the classroom, so I constantly invest time in my students’ success, both in and out of my class. It’s nothing to hear me say, “Hey everybody, where are those schedules? You all know I’m supposed to come see the games this weekend!” Parents and students both know that I’m willing to attend any of their extracurriculars. If they give me the information, whether it’s a recital, a fundraiser, or a booth at an event in our downtown, I’ll be present. There is never a moment in which I don’t show excitement for their success. 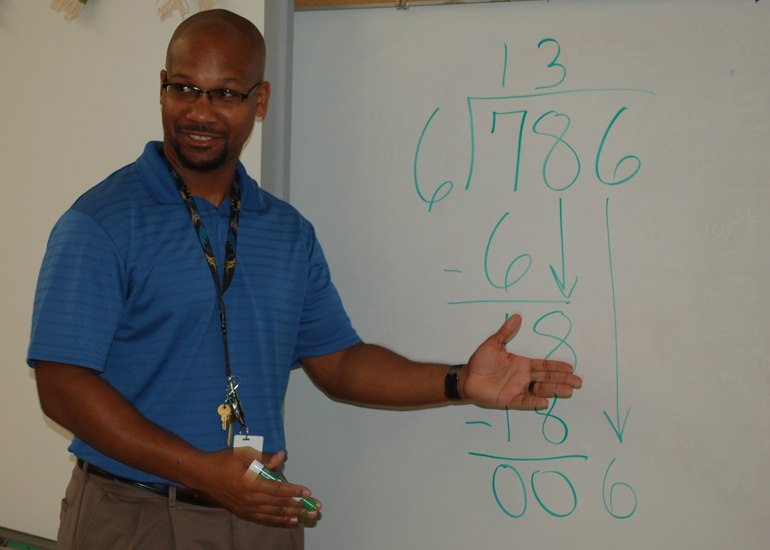 If you’d asked me years ago where I thought I might be today, never in my imagination would I have pictured an elementary school. I’ve always enjoyed connecting with people from all walks of life, but I would never have guessed that ability would lead me to the classroom.

When I arrived in Staunton, I knew only my wife (we were dating at the time) and had a degree in exercise science. I wasn’t having any luck finding work in that field, so I took a job in a factory on weekends. During the week, I became a substitute teacher at the high school where my wife was teaching. I became a regular there and was asked to become the track and field coach during my first year. By the second year, I coached year-round and created winter programs for the off-season students to attend. After four years, my wife and I had a serious conversation and decided I should pursue a career in the classroom, so I completed a master’s program at Mary Baldwin University. Shortly after, I began working at my current school.

Students are intuitive and realize when a teacher really cares about them as a person, and not just as a test score. I know that students see me as a giant, and maybe as a man with a rough, even scary, exterior. I’m just the opposite, really. I create environments where students enjoy coming to school. Because of this, they’ve come back year after year to tell me about their successes and just to say, “What’s up Mr. M?”

Take that time, make those bonds. Your students will benefit for years to come.

Montague, a member of the Staunton Education Association, teaches fourth grade at Ware Elementary School. He was the city’s 2018-19 Teacher of the Year.