Negotiations: How and Why We’re Making It Happen

Excerpts from a new VEA report on collective bargaining.

Through the collective bargaining process, educators bring their professional experience and ideas to the table—and that will enhance opportunities for students.

In other states with collective bargaining, educators and school districts have negotiated agreements that lowered class sizes, provided for extra resources for students, and addressed school health and safety issues, among other benefits, benefiting educators as well as students.

Before the Virginia Supreme Court put an end to locally bargained contracts in 1977, VEA locals had bargained provisions on such issues as adding art, music, and reading teachers, school discipline policies, setting of the school calendar, and many others.

Negotiations ensure that the perspective of teachers and ESPs, who see students every day, will be recognized—and that’s good for public schools. 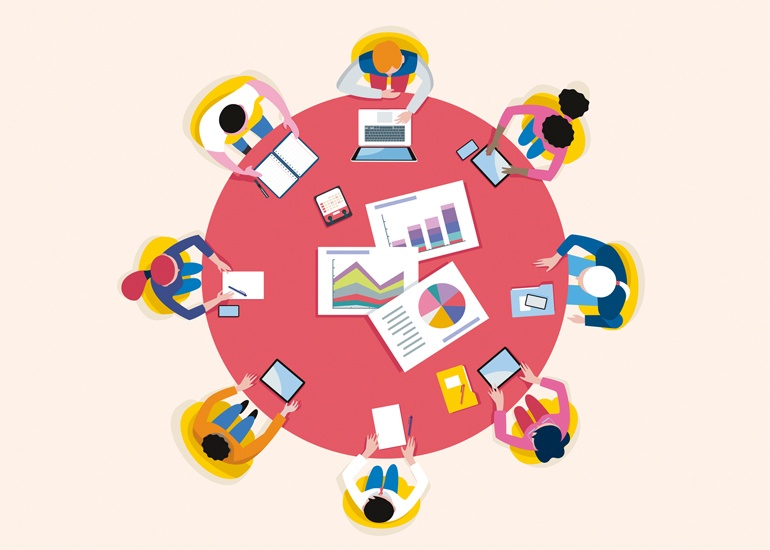 Locally bargained contracts help ensure that Virginia attracts and retains the best educators to our classrooms.

Frequent staff turnover hurts students, and low pay and benefits are one reason that teachers leave their jobs.

Virginia has hundreds of unfilled teaching positions, and many other positions are filled by individuals without full certification. Virginia ranks 32nd in the nation in teacher pay, while enrollments in teacher preparation programs are declining.

Collective bargaining can help ensure educators are paid a professional wage with adequate benefits, and that will increase the supply of excellent educators.

Collective bargaining ensures that educators have a genuine voice in their school division.

Bargaining provides a means for identifying—and solving—problems and challenges for the betterment of student learning.

Collective bargaining provides an avenue for addressing the racial and social inequities that exists in our public schools and communities.

VEA, NEA, and local affiliates of the VEA have long advocated for policies to advance equity and justice and worked to better equip school staff to advance those goals in classrooms and communities.

In 2020, two events made these goals even more vital. The COVID-19 pandemic, which disproportionately harmed majority Black and Brown communities, laid bare the longstanding structural flaws in Virginia K-12 public education funding. Moreover, the social movement rising after the deaths of George Floyd and Breonna Taylor brought the inequities into every American living room.

The events of 2020 underscore the potential of collective bargaining to advance our goals of racial and social justice.

While there are many local variations, here is how the collective bargaining process typically unfolds in public education in the United States:

Preparing for bargaining. Both sides form bargaining teams and gather information. The union’s team usually is selected through a process outlined in the union’s constitution and/or by-laws, while the management team is designated by the employer. The union leadership meets with its constituents and/or conducts surveys to identify and prioritize issues. The priority is on listening to members, and tactics include 1-on-1s, townhalls, surveys, or information gathered by building reps.

Developing a bargaining team. Bargaining teams should represent the membership and include building reps, rank-and-file members, and union leadership. The team will sit co-equal to the school division’s bargaining team on reaching an agreement that meets student and member needs.

Conducting negotiations. Teams agree on ground rules, meet at an agreed-upon location, and start negotiations. Some contract provisions remain the same from contract to contract. Other sections can be changed and either side may propose a new bargaining topic. State law and court cases typically determine the mandatory, permissive, and prohibited subjects of bargaining, although Virginia has not yet spelled this out. In other states, school employers are typically required to bargain about compensation and insurance, allowed to bargain about class sizes or schedules, and not required to bargain about things such as attendance zones or providing in-person or remote instruction during a pandemic.

Ratifying the contract. When the union and employer teams have reached a tentative contract agreement, they review the proposal with their respective constituency groups.

The union holds a ratification meeting where employees—typically members only—have the opportunity to ask questions and offer opinions on the tentative agreement. Individuals are then asked to vote, usually by secret ballot. Absentee ballots may also be available so that everyone has an opportunity to vote. A majority of votes determines if the contract is ratified or rejected.

The management team generally seeks approval from the school board.

Resolving a contract dispute. If the parties can’t agree, state law generally specifies how the dispute can be resolved. Usually it involves mediation, arbitration, and/or a strike or lockout. Virginia law does not establish any procedure for resolving collective bargaining disputes, however, and school employee strikes remain illegal. The best way for the union to resolve disputes is to have a united membership that stands together.

Changing or clarifying the contract. With the agreement of both parties, any section of a ratified contract can be revised during the term of the contract. In many districts, labor and management representatives meet regularly to talk about issues of mutual concern, often through a labor-management committee. In addition, either at the bargaining table or during the life of a contract, the parties can create Memoranda of Understanding (MOU) related to a specific issue. This gives the parties an opportunity to reach a temporary agreement on an issue that is important to both.

In the late 1960s and early 1970s, in conjunction with nationwide gains in union membership and passage of laws permitting public sector collective bargaining in some states, VEA and other public employee unions formed a coalition to win a Virginia law. The effort failed, but several VEA locals capitalized on their strong membership and power to win representation and bargaining rights.

By the 1970s, VEA locals in Alexandria, Arlington, Charlottesville, Fairfax, Falls Church, Norfolk, Prince William, and Virginia Beach and a few others—representing more than one-third of the state’s 90,000 teachers—negotiated contracts, board policy, and/or MOU with their local school boards. Wages and benefits were negotiated, but the agreements also included issues such as discipline policies and specialist positions in art and music.

In 1977 the Virginia Supreme Court overturned these arrangements, saying that local boards lacked the authority to bargain collectively or to even extend exclusive representation to an employee group as bargaining agent. While this was a blow to educators, subsequent legal opinions and state regulations made clear that:

After 1977, VEA campaigned to overturn the ban on public sector collective bargaining in Virginia. As part of one campaign, members approved a 10-year plan to win bargaining back, but it failed to gain traction in the General Assembly. A subsequent VEA campaign using the catchphrase “Professional Negotiations” also failed to deliver a solution. In fact, the General Assembly in 1993 passed legislation codifying the prohibition of collective bargaining by public employees.

The drought continued until 2020.

Virginia elections in November 2019 paved the way for the repeal of the ban on collective bargaining for public employees during the following session of the Virginia General Assembly. Thanks in part to significant work by VEA and its allies, Election Day 2019 found Democrats winning majorities in both the House and Senate.

The shift toward legislators who were more friendly toward K-12 education and labor issues presented an opportunity to gain laws helping workers, middle-class families, and students and educators. VEA led a long list of labor groups in the “Better Bargain” Coalition that worked with legislators to win a repeal the ban on public sector collective bargaining.

Between January and March, VEA members and Coalition partners lobbied vigorously for passage of a law overturning the ban. VEA members sent more than 1,000 messages to legislators during discussion of collective bargaining legislation, and VEA participated in a vigorous media and advertising campaign advocating passage.

Finally, on the last weekend of the 2020 General Assembly, the Virginia House and Senate passed a compromise bill that repealed the ban and was “permissive” regarding bargaining: Localities that chose to recognize an employee group and negotiate agreements were now permitted to do so, but localities also had the right not to take these actions.

Though the “permissive” bill was not as robust as advocates sought, it was nonetheless an historic win for the labor movement. The ban that had stood since 1977 was overturned. “This is the most significant change in Virginia labor law in decades,” Economic Policy Institute President Thea Lee said about the legislation.

Governor Ralph Northam signed the legislation, but added an enactment clause delaying implementation until May 1, 2021 because of the impact of COVID-19 on Virginia’s economy.

VEA’s work following bill passage began with gaining a better understanding of what the new law would mean and what it could mean for VEA locals and for school divisions. To win bargaining, a VEA local must ensure that its school board both adopts a Resolution endorsing bargaining and recognizes the VEA local as the bargaining agent.

The new law appears to allow employees to get the public employer to adopt a bargaining resolution and recognize exclusive representative at the same time. This process works only for initial recognition to start bargaining. VEA hopes to seek initial recognition by presenting a school board with cards or a petition showing that a substantial majority of school employees designate VEA as their representative in bargaining.

Significantly, the law does not require the local school division to bargain. VEA locals must work diligently to secure school board approval unless and until a more forceful law is passed by a future General Assembly.

Passage of the collective bargaining law in 2020 presented a rare opportunity. By increasing membership and strengthening the capacity of locals, VEA can now be positioned to support high functioning, bargaining locals across the state.

To capitalize on VEA’s historic legislative win, the Union began work on what became known as the ‘Organizing to Bargain’ campaign. The campaign—O2B for short—is a multiyear effort to strengthen our Union and public schools by building the strength of locals, gaining recognition locally as a bargaining agent, and negotiating and defending contracts.

“The Organizing to Bargain campaign is the means through which we will make sure that educators in our Local Unions gain a true seat at the table,” says VEA President Dr. James J. Fedderman. “No one is better equipped to assess students’ needs and fight for learning opportunities than the educators who comprise the VEA. We will mobilize our members and leaders to prepare to gain official recognition and bargain our first contracts.”

According to a poll conducted by Virginia Commonwealth University, 70% of Virginians say public schools do not have enough funding to meet their needs.