Chanting, cheering, and with a growing sense of urgency, educators turned the State Capitol into a sea of red for Lobby Day and the ‘Fund Our Future’ rally, demanding that legislators finally put their funding money where their campaign mouths have long been.

“It’s way past time for them to live up to their obligations to the children of this Commonwealth and to the people who work with them!” boomed VEA President Jim Livingston to an enthusiastic crowd of over 2,000, who responded raucously as Livingston added a promise: “We will be ever vigilant to hold them accountable for what they’ve promised they would do—and if they don’t vote to support our students and our schools, we’ll help them pack their stuff and go!”

Two examples of why Livingston and VEA members feel so strongly: Virginia ranks 40th in the United States in state funding for public education on a per-pupil basis, and our state’s teachers are paid $8,500 less than the national average. Facts like those have spurred the nationwide #Red4Ed movement, with educators adopting the color to bring attention to glaring needs facing our public schools. 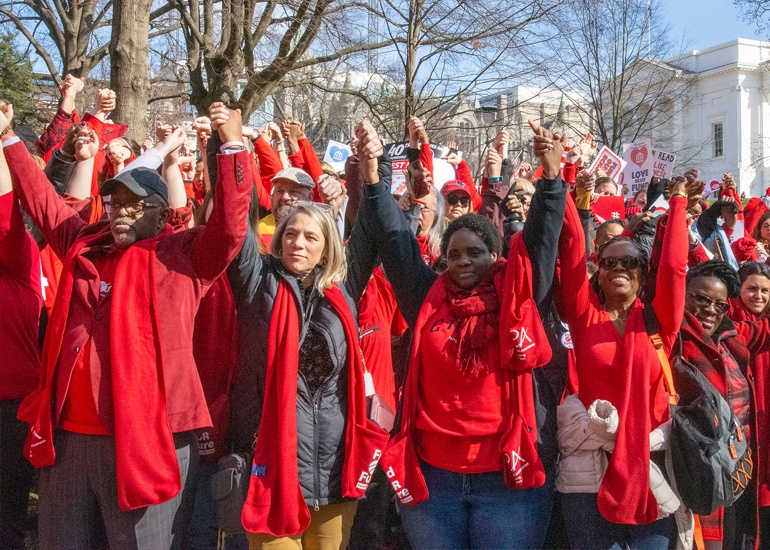 Union members and public education supporters came to Richmond in busloads, spending the morning meeting with elected officials before the noontime rally took over Capitol grounds. There, kindergarten teacher Lauren Brill, president of the Fauquier Education Association, kicked off the festivities by firing a list of questions at the crowd. She wondered if any of the educators in attendance had ever paid for classroom supplies out of their own pockets, lost sleep over one of their students, had their physical and mental health affected by their work, had considered quitting, and were living paycheck to paycheck, and the crowd roared in response to each question.

It’s not just educators who have reached churning levels of frustration with the lack of state funding for schools, either. Local officials have had it, too. “I am tired of having to make choices between taking away mental health resources in order to provide instructional assistants with more pay,” Fairfax County School Board member Abrar Omeish told the rally crowd, “or between school meals and after-school programs. What are we investing for the future?”

Stafford County Public Schools Superintendent Scott Kizner echoed her sentiments. “Every year we have to go out and shout and sing slogans to do what’s right,” he told attendees. “The time is up!”

Evans pointed out something that’s not fair: “It hurts to see parents discourage their children from going into the field of education because they’re afraid their kids won’t be able to support themselves,” he said. Something that could go a long way toward alleviating that situation is something that’s become a major priority for VEA in this legislative session: the return of collective bargaining for public employees in Virginia, which was banned by our Supreme Court in 1977.

In the meantime, educators continue to struggle financially, despite the incredibly important work they’re charged with. “My husband and I are both teachers,” said rally attendee Alden Blevins of the Goochland Education Association. “He was in the public schools for a while but now teaches in a private school in order to make more money. It’s hard for us to make ends meet, even though we both have college degrees.” She’s far from alone: Virginia Beach Education Association member Anthony Waldo read a “letter to Virginia” when he took the podium, including the lines, “Why are you requiring such greatness from your educators and students and doing so little in return? You keep showing me signs that you’re for lovers, but Virginia—where is the love?”

Inadequate funding isn’t just about salaries. Goochland’s Amy Heilmann accompanied her colleague Blevins to the rally and brought along her 6-year-old daughter, Zelda. Zelda had hand-drawn her own sign, illustrating items on her if-we-had-better funding wish list, which included new playground equipment, art and music supplies, and new apps for school use. 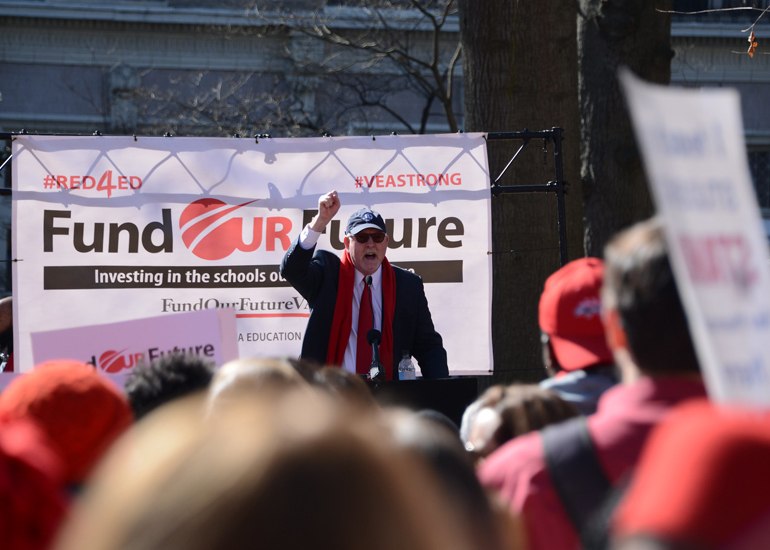 Stafford County’s Jeff Trigger, a middle school English teacher, says because the county has so many unfilled teaching positions, his class sizes have grown steadily in recent years, including several with more than 30 students last year. The smallest had 29. Martha Wingfield, mother of a Richmond teacher, cleared her schedule to be at the rally. “A lot of people complain,” she said, “and then don’t show up. It’s important to show up—more people should be here to show their support for our schools and teachers.” Trigger came to Richmond for Lobby Day because, “Our elected officials need to hear us. We need to do better by our students. We need to meet collectively like this and let everyone hear our voices.

His Stafford colleague Amtulnorr Grosser agrees. “We can’t complain, we can’t say we aren’t able to do this or that if we aren’t willing to show up and do something about it,” she said. “This year, something struck me. I was planning to be at home and get my grading done and my things organized but I heard people saying that if we keep doing that, nobody is going to make things better.

“Your voice is louder when there are more of you,” she added with a smile.