The 2020 Legislative Session was Historic for Schools, Educators

While COVID-19 has wreaked havoc with life in general and Virginia’s economy in particular, the 2020 General Assembly will still go down as a historically successful one for public schools, students, and VEA members.

We’ll remember 2020, perhaps first and foremost, for the return of collective bargaining to Virginia’s educators after more than 40 years of being unable to negotiate contracts with our school divisions. Virginia’s Supreme Court banned the practice in a 1977 decision.
“In nearly every other professional environment, employees have the right to negotiate working conditions with employers,” says VEA President Jim Livingston, “but until this year, Virginia was one of only three states in the country that didn’t allow public employees to do this. Before the Virginia Supreme Court decision, one-third of all our teachers were working in a school division with a bargained contract.”

Far more than just a way to ensure better pay and benefits for educators who sorely need them, bargaining is also for the good of all. As educators negotiate their working conditions, they’re also negotiating the learning conditions for students. Collective bargaining has been used across the country to address issues like class size; gaining additional reading, art, and music teachers; setting school calendars; instituting fairer discipline policies; and much more. 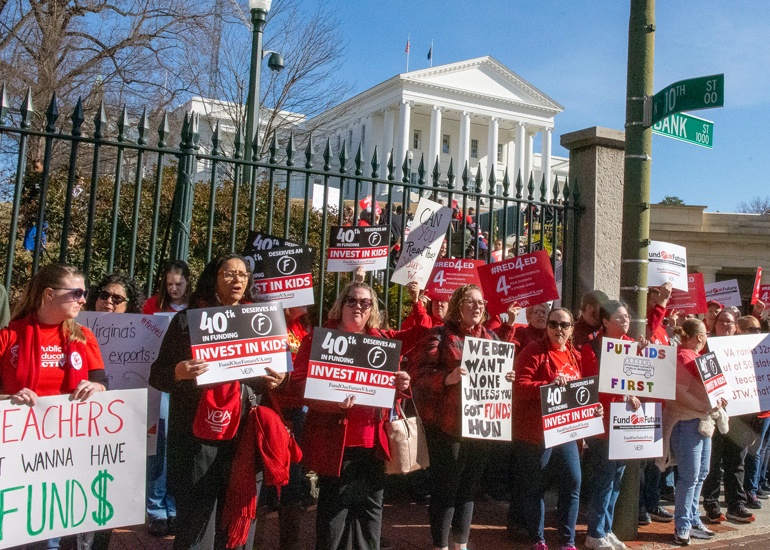 “Simply put,” says Livingston, “the right to negotiate gives us the leverage we need to get our kids the resources they need.

Unfortunately, due to the still-to-be-estimated economic impact of the coronavirus, Governor Northam postponed the implementation of the new collective bargaining law until next May. While that’s not ideal, it does give VEA’s local associations time to get ready. Under the new law, local school boards must pass resolutions agreeing to bargaining and setting out processes for negotiations.

VEA locals will need to work on growing their memberships and their ability to influence local communities (including elected officials) to gain a contract.

While gaining the right to negotiate contracts was a huge win, it was far from the only success racked up for educators in this year’s General Assembly session. VEA members, lobbyists, and staff all worked closely with legislators who understand and support public education, and here’s some of what else we accomplished:

Significant improvements were made to education funding, too, but items such as teacher salary increases, more guidance counselors, aid to rural schools, and more services for at-risk students are on hold because of the coronavirus’s hit on the economy. The Governor will almost certainly call the General Assembly back for a Special Session once the state is able to make revenue forecasts that accurately reflect COVID-19’s costs.

There’s no question that state funding will feel the pinch of the coronavirus across the board, but Livingston believes that it’s past time for the children and educators of Virginia to be a top priority for budget decision-makers.

“I’m tired of education being ‘a’ priority,” he says. “We expect K-12 to be ‘the’ priority when this crisis is over. We understand where we are and we know what’s at stake, but when the economy recovers in Virginia our children must be first in line. Public education has been put on the back burner for far too long.”

The kind of progress public education made in the 2020 General Assembly would not have been possible without the steadfast support of key legislators who understand the critical role played by both our schools and our educators. So, VEA singled out several of them in the 2020 Legislative Awards as a small token of our gratitude.

In recognition of their leadership in the historic movement to help public employees to regain the right to negotiate contracts with their employers, Delegate Elizabeth Guzman and Senator Jennifer Boysko have been named VEA’s 2020 Legislators of the Year.

Their efforts helped lead to the most important piece of worker’s legislation passed in Virginia in a generation. Now, public school employees are no longer prohibited from sitting down with their local school division and using the collective bargaining process to get the best learning conditions for students and working conditions for educators. 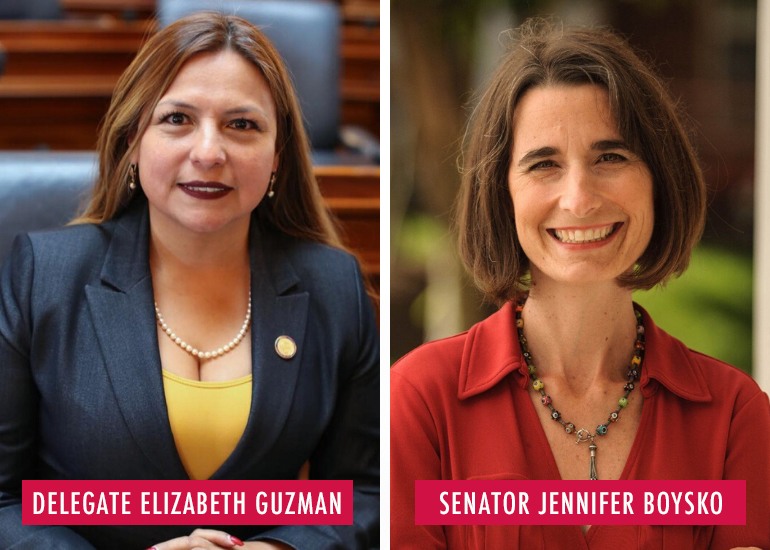 “Delegate Guzman and Senator Boysko helped make history in Virginia,” says VEA President Jim Livingston. “We’re extremely grateful to both of them for helping make a huge step forward for our schools happen this year.”

The VEA also honored Delegate Martha Mugler as the 2020 Legislative Rookie of the Year, in honor of her leadership in standing up for improved salaries for Virginia’s public school teachers. Her House Bill 233 would have required that our teachers be paid at or above the national average salary for teachers by 2025. Mugler also introduced budget amendments providing teachers with a 4.8 percent raise in both years of the biennium.

“While Delegate Mugler’s bill was defeated in the House Appropriations Committee and her amendments weren’t included in the budget, we believe both were an important victory in the battle to address a long-time problem, and one that Virginia must address,” says Livingston. “We look forward to working with her in the years ahead.”

Six Senators and four Delegates also earned Legislative Champion Awards for their support of public education initiatives in this year’s General Assembly session. They are: